A brief jog through some of Boston’s many universities
Sept 2021
Christopher
K.
Materials Science and Engineering

Coming from an undergraduate university located in a smaller city, I was used to living in an area with few nearby schools to compare to my own. In contrast, the Boston area is littered with colleges! In fact, Wikipedia cites that there are 45 higher educational institutions in the metropolitan Boston area. When I moved to Cambridge last fall to begin my PhD, I thought it would be interesting to explore as many of them as I could on foot, as universities tend to have both breathtaking views and paved paths suitable for outdoor exercise.

On the first few workouts, I like to forgo Google Maps for directions and just follow the lay of the land. Simply picking a random direction to forage ahead culminates in more interesting routes to traverse while removing the threat of crowded running trails (especially important in the era of COVID-19 and social-distancing). Moreover, without a way to gauge the distance covered on foot, it’s easy to unknowingly spend more time outdoors by exploring hidden parts of the landscape you might not have found otherwise. With this in mind, I decided to commence my exploration of the nearby university campuses as a healthy way to gain some appreciation for their landscape, “runnability,” and architecture. 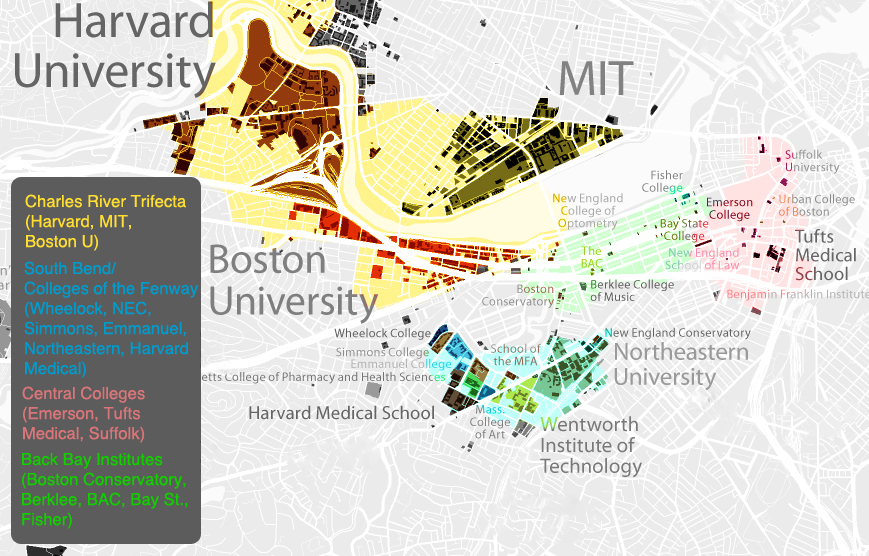 A map of a small selection of the many universities in Boston. Who knew there were so many? (Photo courtesy of city-data.com).

I first decided to venture to MIT’s campus to get a feel for what the landscape was like. Most striking to me was how sprawling yet self-contained the borders of what pertained to the “MIT world” seemed to be. In particular, the campus is large and stretches across a large portion of the area surrounding the Charles river, but the boundary between the campus and the surrounding city is abrupt. One can walk through the campus and immediately realize the moment they step into the bustling city of Cambridge. For instance, the rough brick exterior, tinted windows, and haphazard mechanical equipment of the nuclear engineering laboratories make the campus seem as if it had been frozen in time since the mid 1950s. In contrast, the newly constructed MIT.nano cleanrooms look quite futuristic and glow brightly with a fluorescent tinge. Much of the central area of campus comes off as very inward focused, modern and sleek, although you can get brief glimpses of the outside world as you pass by small intersections which provide glimpses of a view of the riverfront. All in all, I would highly recommend planning evening runs around the Kendall Square area; while the riverfront path itself can be densely populated at peak times, the sidewalks intersecting the main quad and bordering the Sloan buildings are much more sparsely occupied and make for a delightful workout.

Later in the week, I strapped on my running shoes and decided to venture to the other side of the river to explore Boston University (BU). Running through BU is quite satisfying because of how linear the campus is! You can essentially run from the BU bridge to the Harvard bridge (the one adjacent to MIT) without interruption. One advantage of this route is that both pedestrian and vehicle traffic is limited on the one-way side street (Bay State Rd) which makes for a more peaceful exercise experience. In contrast to MIT, many of the residential buildings are older and more historic, with small apartments stacked alongside and on top of each other to form rows of townhouses. Directly opposite them are the much blockier dining halls, classrooms, and administrative centers. These buildings also act to insulate the noise of city traffic, a definite plus. There are also smaller footbridges which can take you from the BU side of the highway to the riverfront side, so you can choose to criss-cross these footbridges if you are interested in a riverfront view. I find that on colder days in the wintertime it’s nicer to stay on the BU side to be sheltered from strong winds, but during the warmer months I tend to cross over towards the river to get the benefit of the cooler breeze. 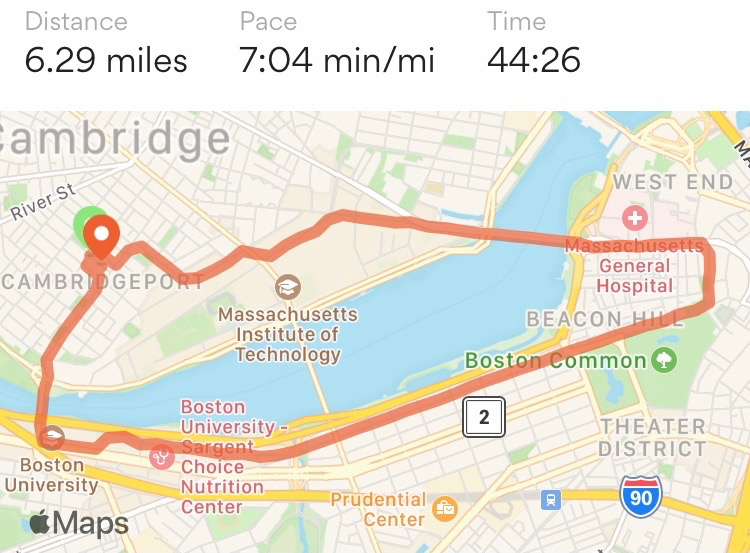 One of my previous runs through both MIT and BU - would highly recommend this route to get a taste of both campuses in one go!

Northeastern University, located on the same side of the Charles as BU but a bit farther from the riverbank, is another pleasant location to jog. The campus comes off as more similar to what one would expect from a traditional urban campus; the extensive use of glass, a nice visual aesthetic, allows for passerby to briefly peer inside. It also seems to make more frequent use of sheltered open spaces with greenery where students can enjoy spending time with classmates, and there are a good number of desirable spots to eat an outdoor lunch. A note of caution: I have found that the physical layout is a bit more convoluted and non-trivial to navigate as a newcomer to the Boston area. All in all, I would cautiously recommend this location as an exercise spot provided that the reader is a decent navigator and good with their geography.

I can’t end this piece without saying a few words about the Harvard campus, of course! Although (arguably) the most well-known university in the area, the campus, in my opinion, is the least suited for outdoor workouts. Even during quarantine, I found Harvard Yard and the surrounding areas to be populated with tourists and passerby, making it difficult to run. Moreover, the buildings seem so tightly packed that it’s difficult to absorb all of the sights at once, and the libraries, classrooms, and residential dorms are placed right up against the walkway which detracts from the visual experience. These downsides, compounded with the loud noise from traffic, would make me hesitant to recommend this location for running. However, there are a good number of easily accessible walkways near the Harvard Stadium and Harvard Business School on the opposite side of the river in Allston, which have the benefit of being spacious and secluded.

Overall, whether you’re a beginner at running or a veteran athlete, I would highly recommend checking out some of Boston’s many universities - it’s always more fun to explore new areas while getting in some exercise!